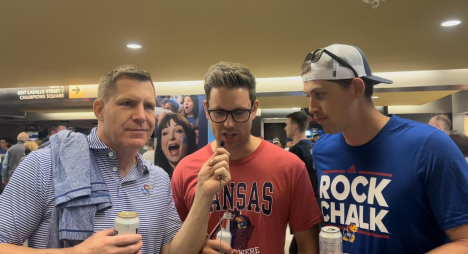 Brendon Hermick, Will Coatney, and Adam Taff discuss their favorite moments of the season.
FANS REACT TO THE HISTORIC KU SEASON
BY: ANNA DENISON
Fans have followed the KU basketball team all season on their way to the championship game
against North Carolina.
This season will go down in KU basketball history. At the final game in New Orleans, fans had
plenty to say about their favorite moments of the 2021/2022 season.
KU fans Pam Slanay and Mary Allen Knobb said their favorite moment was making it to the
Final Four.
Brendon Hermick, Will Coatney, and Adam Taff said they have enjoyed seeing Remy Martin
excel in the tournament.
“I love the fact that Remy Martin has persevered and here at the end he’s showing his true colors
and he’s adding that energy that I think we all love to see at Kansas,” said Taff.
Clifford Depew said his favorite games this season were when it came down to the last minute.

“I think my favorite moment was watching Dujuan Harris make the game-winning lay-up against
Iowa State when all hope was lost,” said Depew.
Mike Boyce also liked when it came down to the end of the game.
“My most favorite moment, this entire season was winning the Texas Tech game in double
overtime,” said Boyce.
With the season over, fans have plenty to look forward to next year.